Life Jackets can save your life! 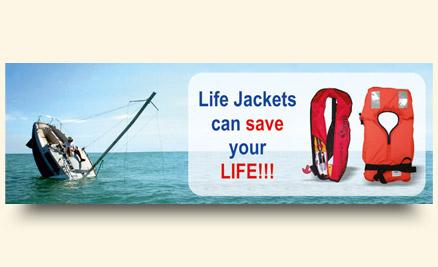 There were 95 maritime deaths in the last five years which might have been prevented if those involved had been wearing a lifejacket or buoyancy aid. These figures were collated following the annual meeting of the Casualty Review Panel in March.

The panel looked at fatal maritime incidents for 2011 and, where there was sufficient information, assessed whether it was probable, possible or unlikely that the person involved could have been saved had they been wearing a life jacket or buoyancy aid.

Commercial fishing and angling are the two riskiest activities where lives might be saved by buoyancy-wear, according to the figures collated by the panel over the last five years.

Transferring between your vessel and the shore is particularly hazardous. Twelve people died boarding or alighting during 2011 and the risk is increased further following alcohol consumption. Eight of these twelve had been drinking before they returned to their vessel. Transferring between a vessel and the shore is a situation where one would not normally be expected to wear a lifejacket or buoyancy aid. Further research will be undertaken regarding this issue.