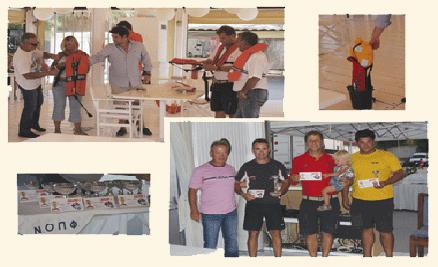 LALIZAS was the sponsor of "Tsouka - Stavridi" sailing race which took place in NOPF from 3 - 4 September 2011.
The race was held in ideal weather on Saturday, September 3, and following by an event on Sunday, September 4.

At the beginning of the seminar, the Marketing Director of LALIZAS, Mr. Spyros Spinoulas presented LALIZAS new generation inflatable lifejackets to his intent audience and compared them with the previous series. He also emphasized safety and comfort as one of their basic characteristics.

At the end, a prize draw took place and the winners received presents. The event gave top racers a chance to collect prizes such as sailing trophies and presents and Mr. Spinoulas awarded the winners of one category.

This new effort had the entire support from the company and we are confident that it will contribute in the enhancement of athletic values.